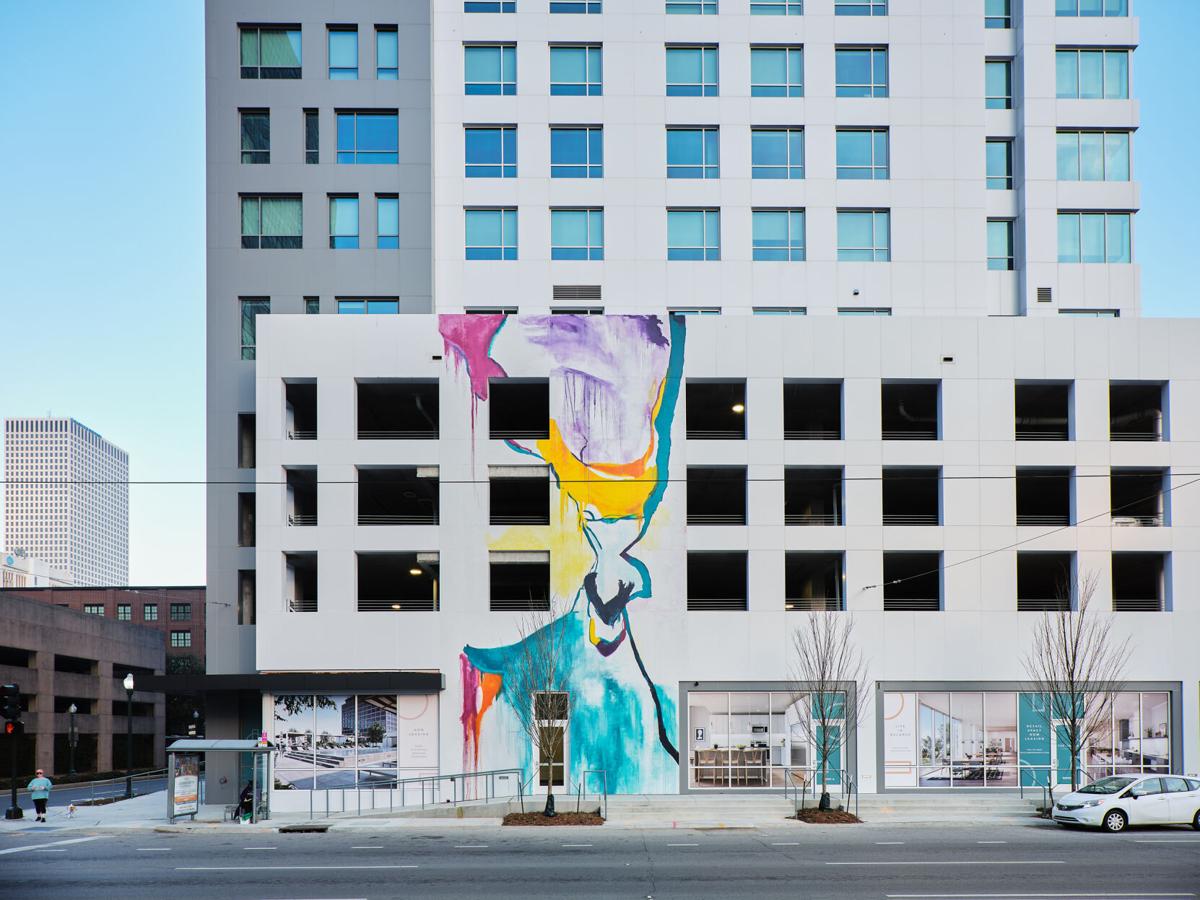 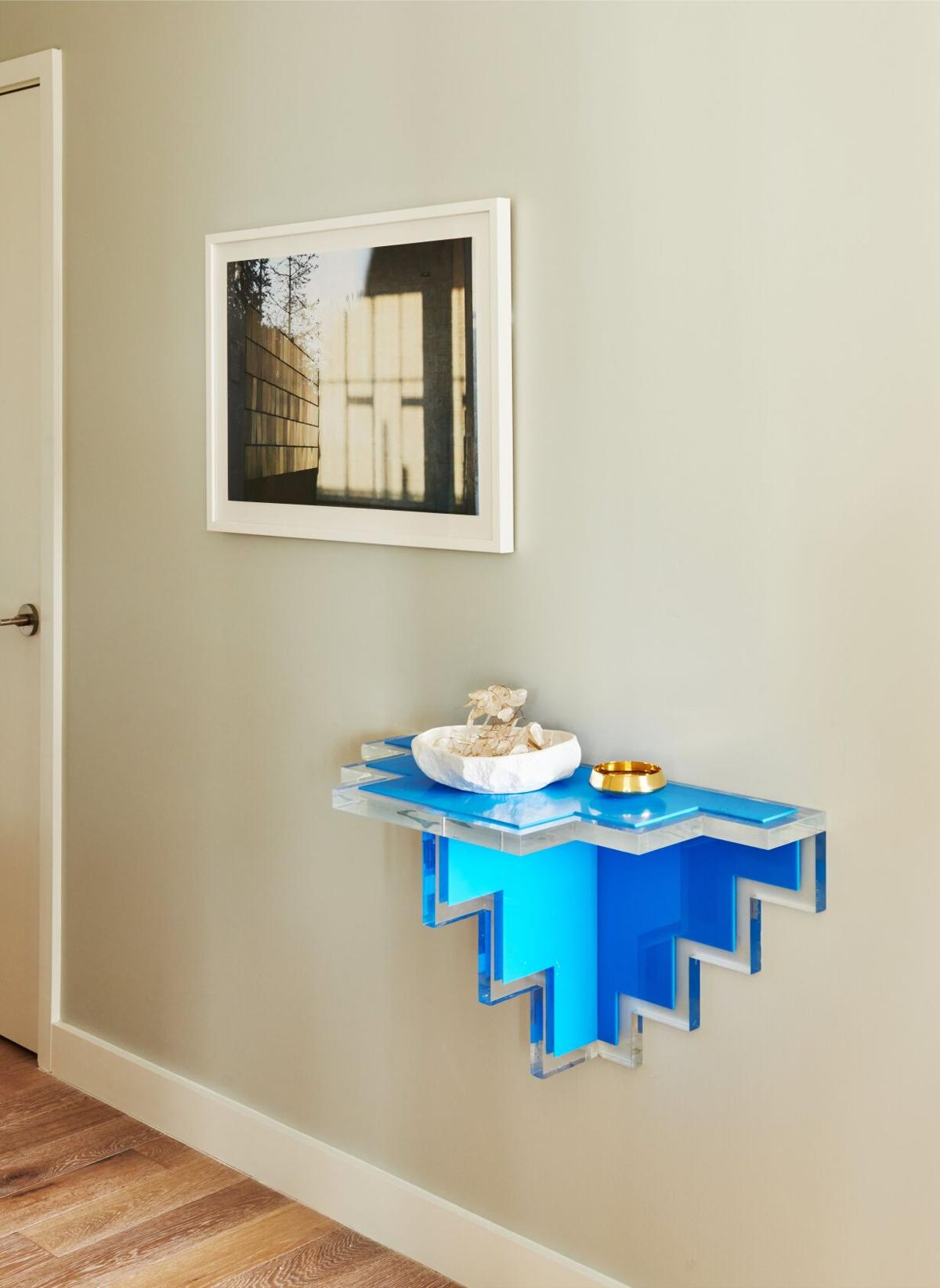 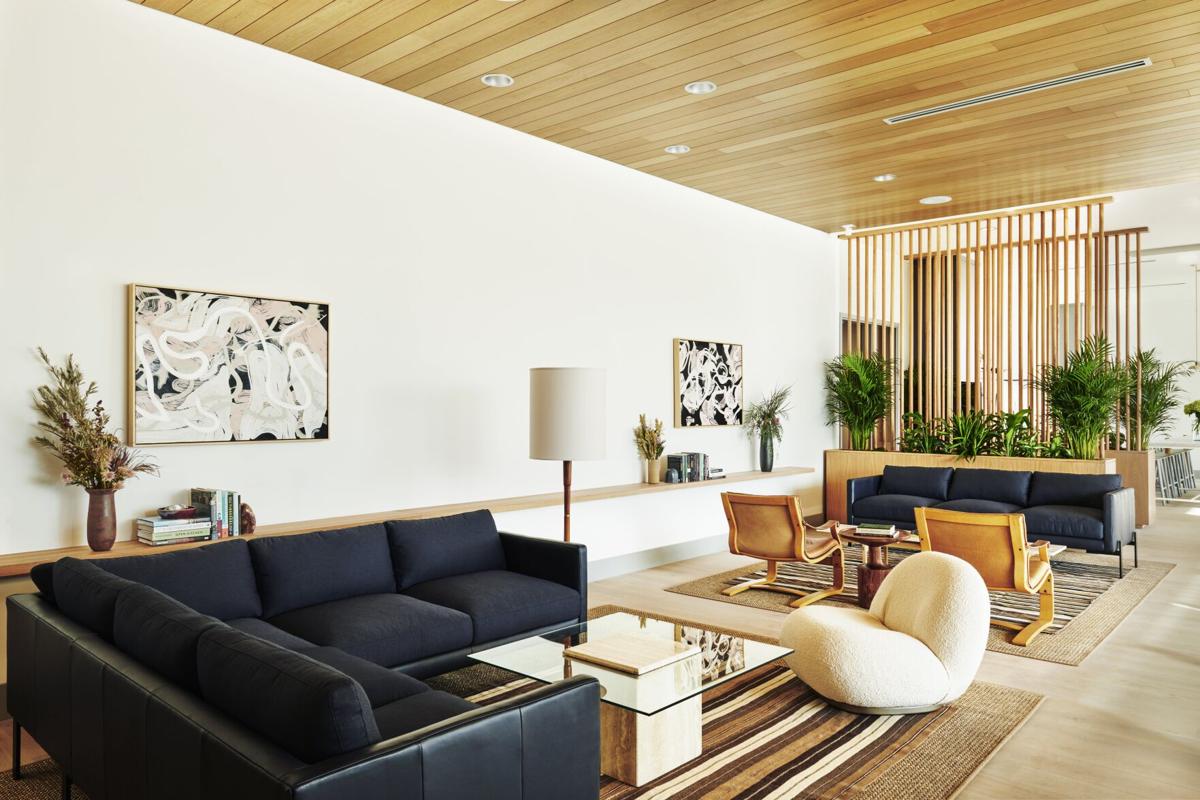 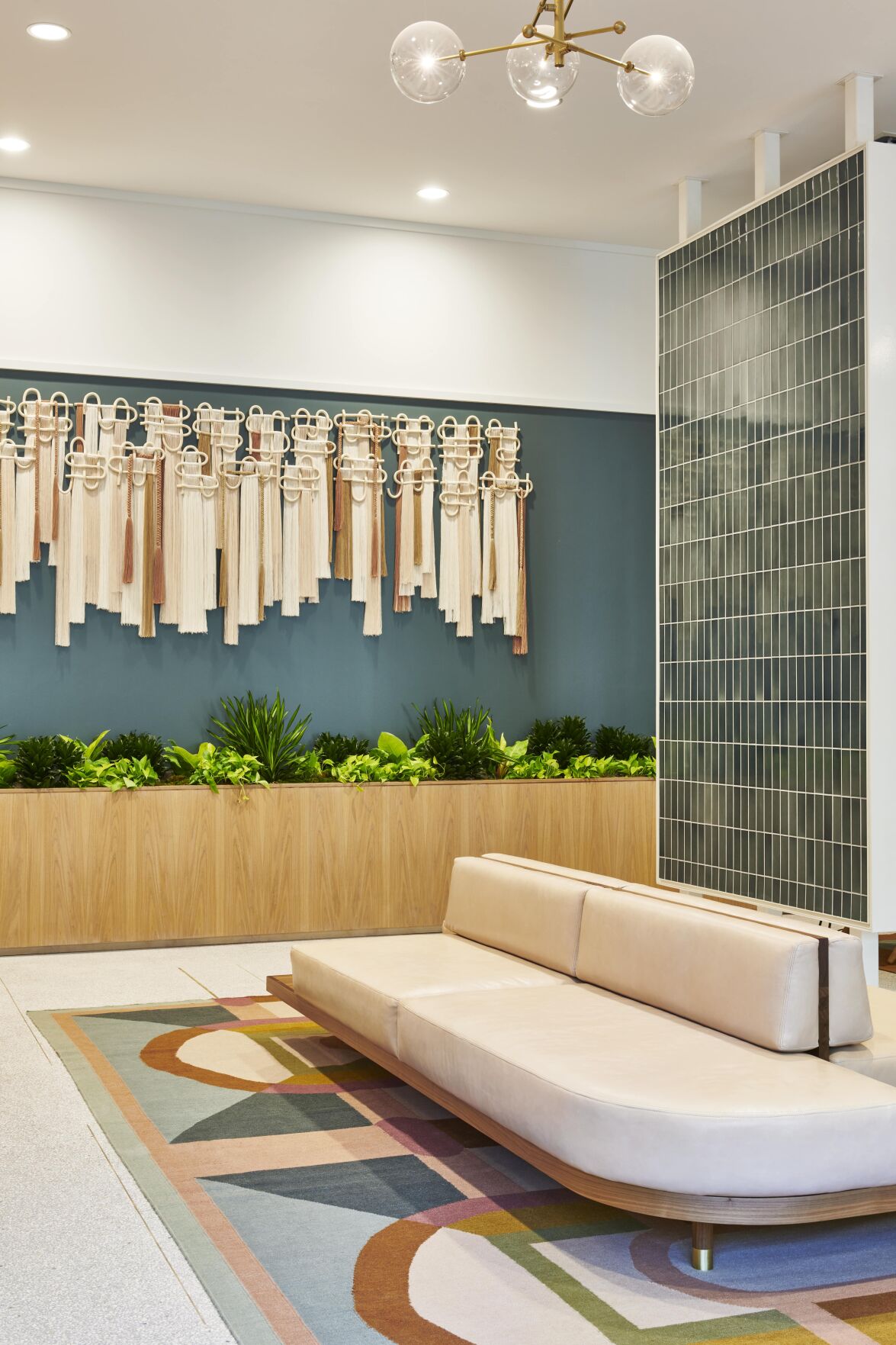 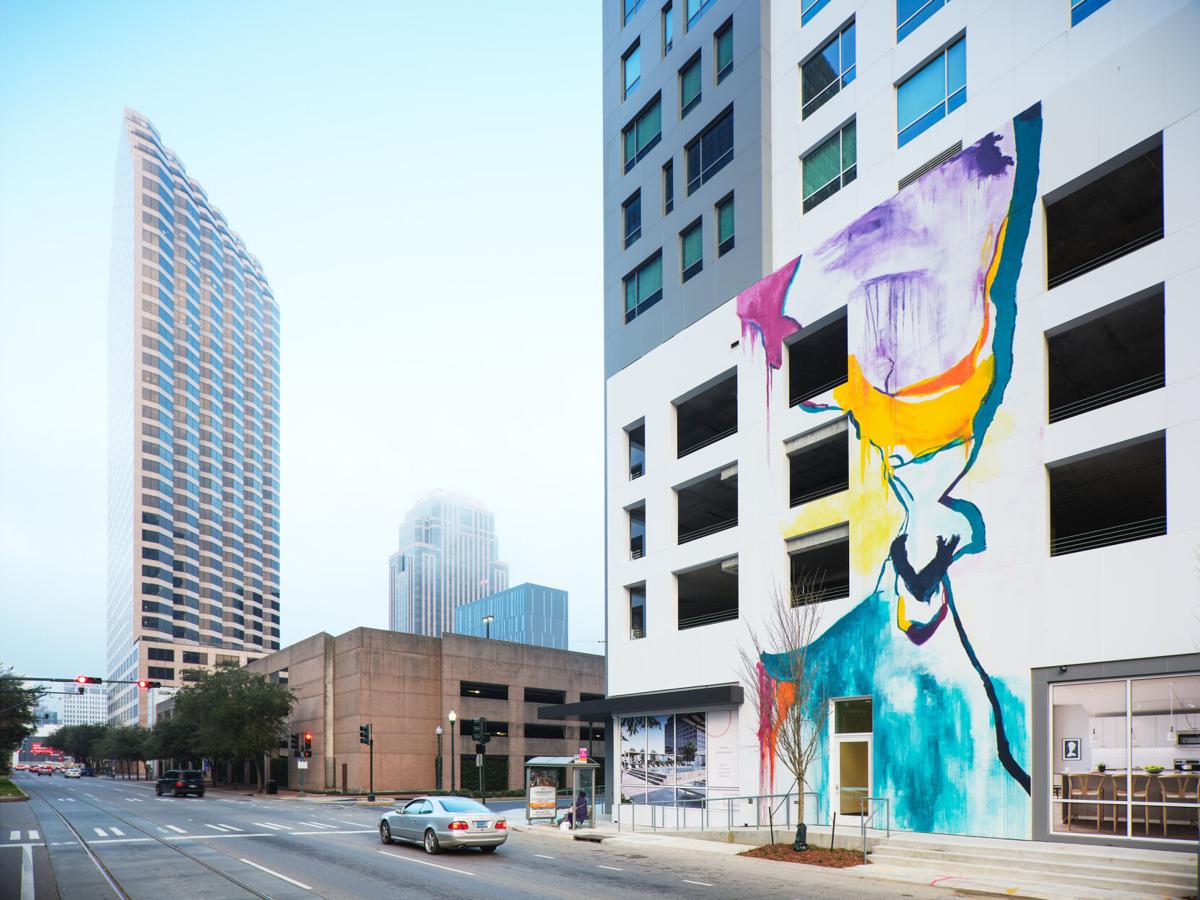 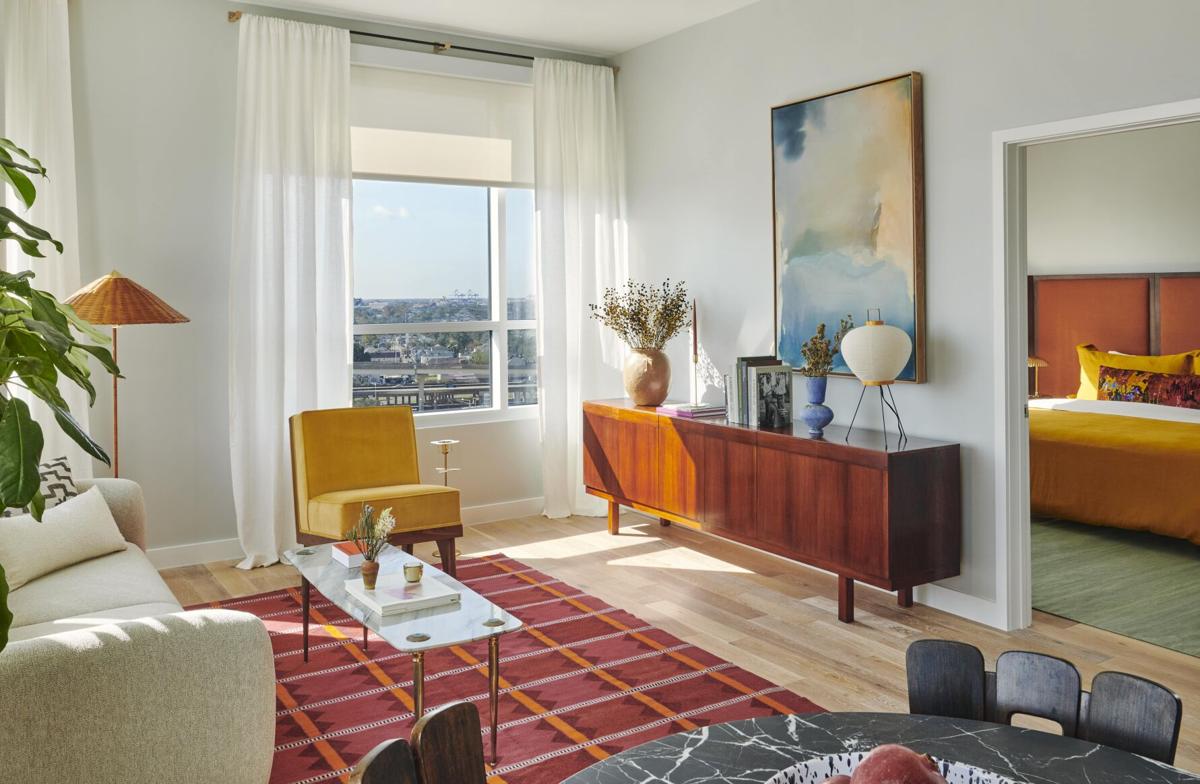 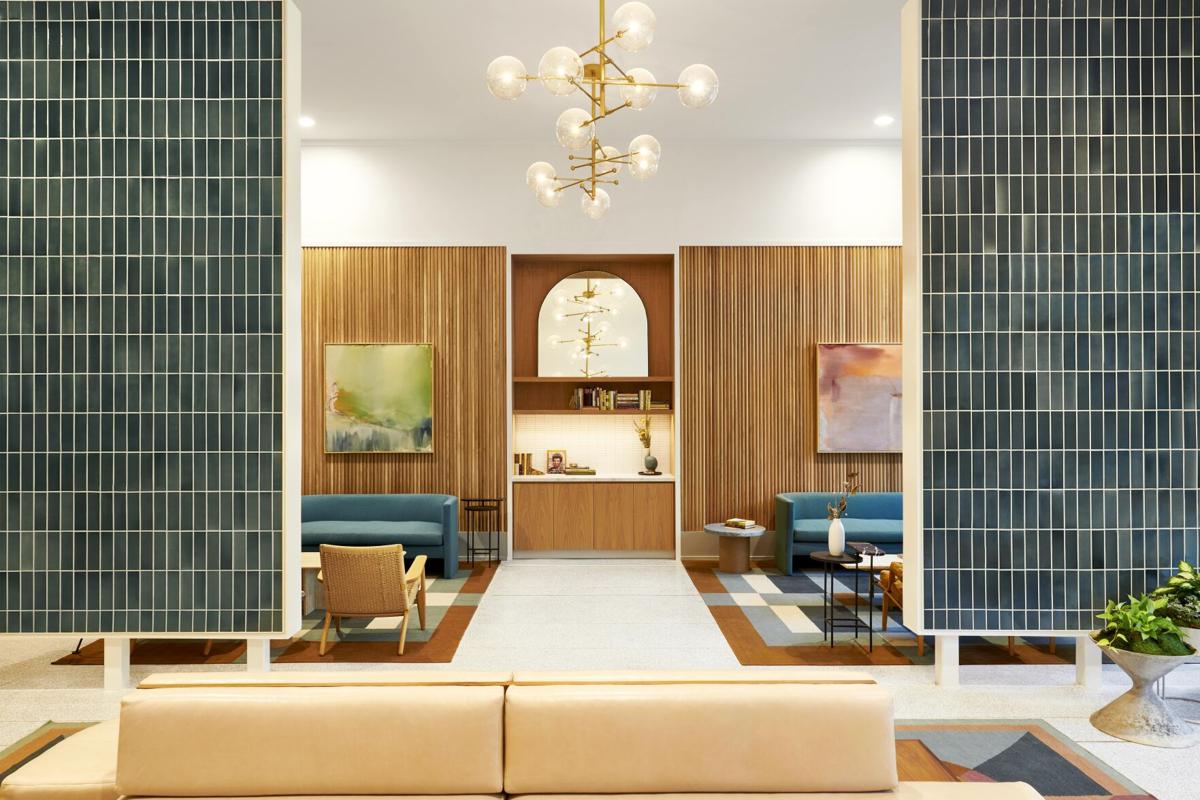 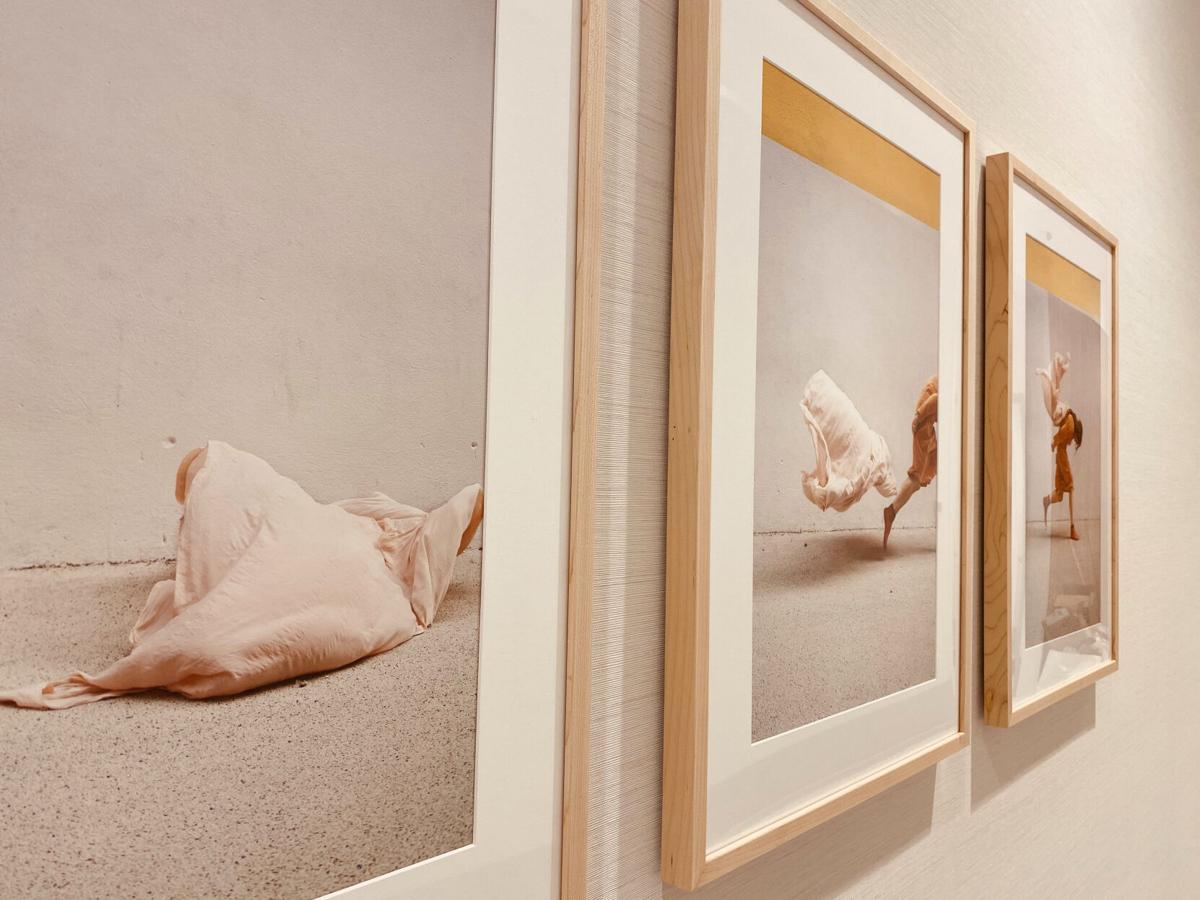 The Odeon at South Market isn't just the tallest building to be built in New Orleans in 30 years. The new residential development is home to a beautiful collection of artwork by both female and local artists displayed through the entire structure, including the outdoor mural created by New Orleanian Anastasia Pelias.

The thirty-story building was developed by Domain Companies (projects include Ace Hotel New Orleans, Maison de La Luz, and The Paramount) and interior design manager Amy Gray worked with local design firm Farouki Farouki (projects include Justine and Saffron) to curate the building's art collection. "We were familiar with some of the artists, mostly the local artists. Others were discovered throughout the research process," Caroline Farouki said.

The carefully curated collection features diverse and talented artists, and the lobby features works by only female artists. The residential apartments and penthouses (located at 1100 Girod Street) opened in January for leasing with 271 studios, one-bedroom, and two-bedroom spaces and penthouses available. Future residents are sure to enjoy the amenities, neighborhood, and abundance of art at every turn.

Below, more information on the artwork, artists, and process.

What were your determining factors when making your final selections on the art?

Initially, our focus was finding art that would complement the interior architecture, furniture, and palette of The Odeon. The interior architecture and forms were inspired by the formal language of Scandinavian design from the 1930s to 1970s. The palette was inspired by colors found in French Quarter architecture—washed out blues, greens and pinks. With this in mind, we wanted the artwork to be somewhat colorful, minimal, and graphic. We were inspired by women designers such as Marta Mass Fjetterstrom, Anni Albers, and Agda Osterberg. As our research evolved, we amassed a large selection of artwork by female-identifying artists and decided that the collection should be centered around women artists—both local and international.

Were the pieces commissioned or found?

It's a combination of both. We commissioned the large ceramic and fringe sculpture in the lobby from a ceramic/fiber artist based in California, Karen Gayle Tinney. We came across her work while researching artists for the project and felt that the tactility and palette of her available works were perfect for The Odeon, however she didn't have any pieces available that worked scale-wise. So, we worked closely with her to develop a large sculpture that complemented the scale of the architecture, as well as the finishes in the space. After working through several design iterations with Karen, we landed on what is now the final installed piece.

We commissioned the two large paintings that hang above the sofas in the lobby. We worked closely with a local artist and designer, Maggie Boggs, to develop the two harmonious yet distinctive paintings. We visited her art studio in Mid-City to learn more about her process and to share our thoughts on the palette direction. As she developed the paintings, she kept in close contact with us. She shared her progress and thoughts on the pieces as she worked. Maggie also created a smaller commissioned painting that hangs in one of the Odeon's guest suites. Upon completion, we worked with Uptown Frames to frame her paintings, as well as a number of other pieces throughout the project.

We also worked closely with Preservation Press, which is based in Lafayette, to source and press some local botanicals. They created two custom pressings for the project—one large, preserved palm leaf and one beautiful yarrow plant clipping. The palm leaf is displayed in the one-bedroom model unit and the yarrow plant hangs in one of the Odeon's guest suites.

Was the plan to always have a mural on the outside wall? How did that come about?

The Domain Companies had previously worked with bringing art to downtown New Orleans. We executed a mural with CYRCLE, a collective comprised of American artists David Leavitt and David Torres, several years ago at The Paramount that was well received. From there, we sought ways to bring more murals to the Central Business District. Sponsored by the Helis Foundation, Domain worked with the Arts Council of New Orleans to establish 'Unframed,' a mural exhibition composed of several large artworks downtown.

Through that program, we executed a mural with artist Etam Cru at The Park at South Market and allowed other property owners in the CBD to participate. Brandan "BMike" Odumn’s piece across from Rouses Market and MOMO’s piece on the Ogden Museum of Southern Art were all part of the first year of the program we created.

The mural outside of the Odeon was painted by New Orleanian Anastasia Pelias. The Odeon's namesake is one of the main inspirations behind its artwork, named after ancient Greek and Roman buildings dedicated to musical performances. With this music motif in mind, Pelias was an ideal fit for the mural as an interdisciplinary artist who paints intuitively to music. She listened to a soundtrack curated by The Odeon's staff as she painted to create a visual manifestation of the music for all to see.

The Odeon is located at 1100 Girod Street.