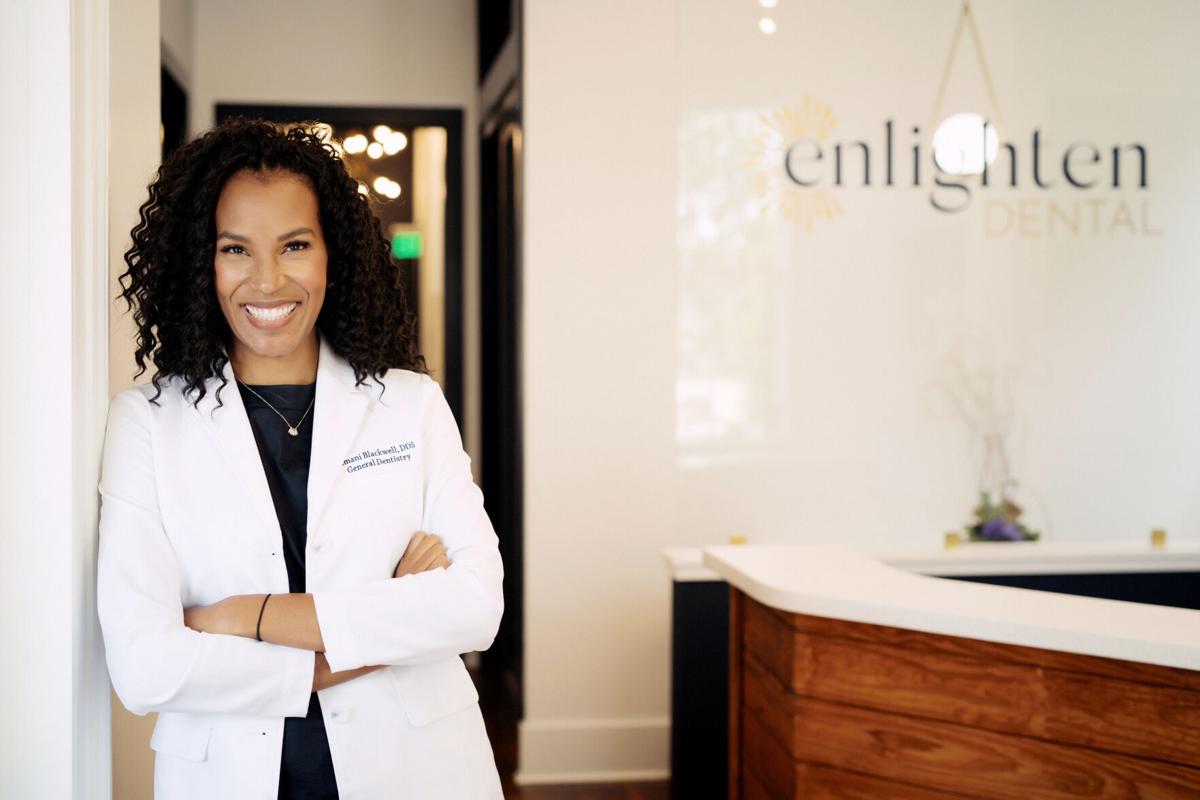 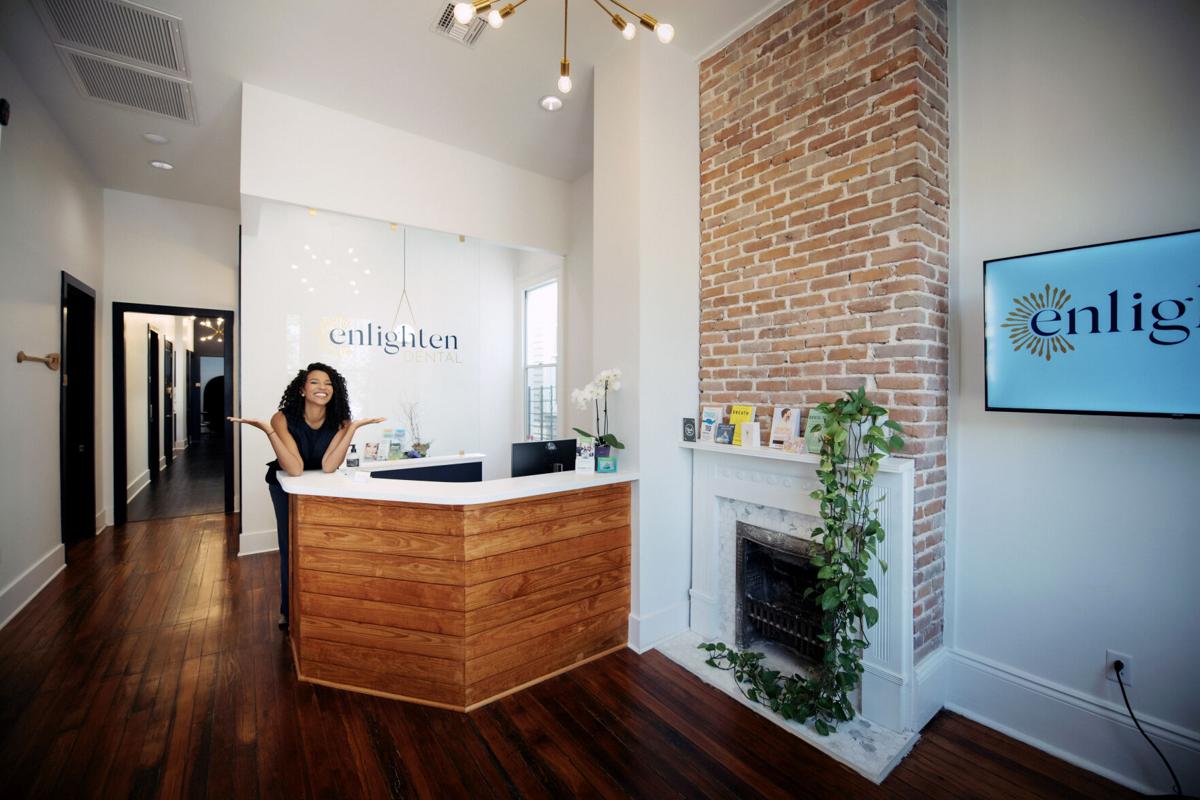 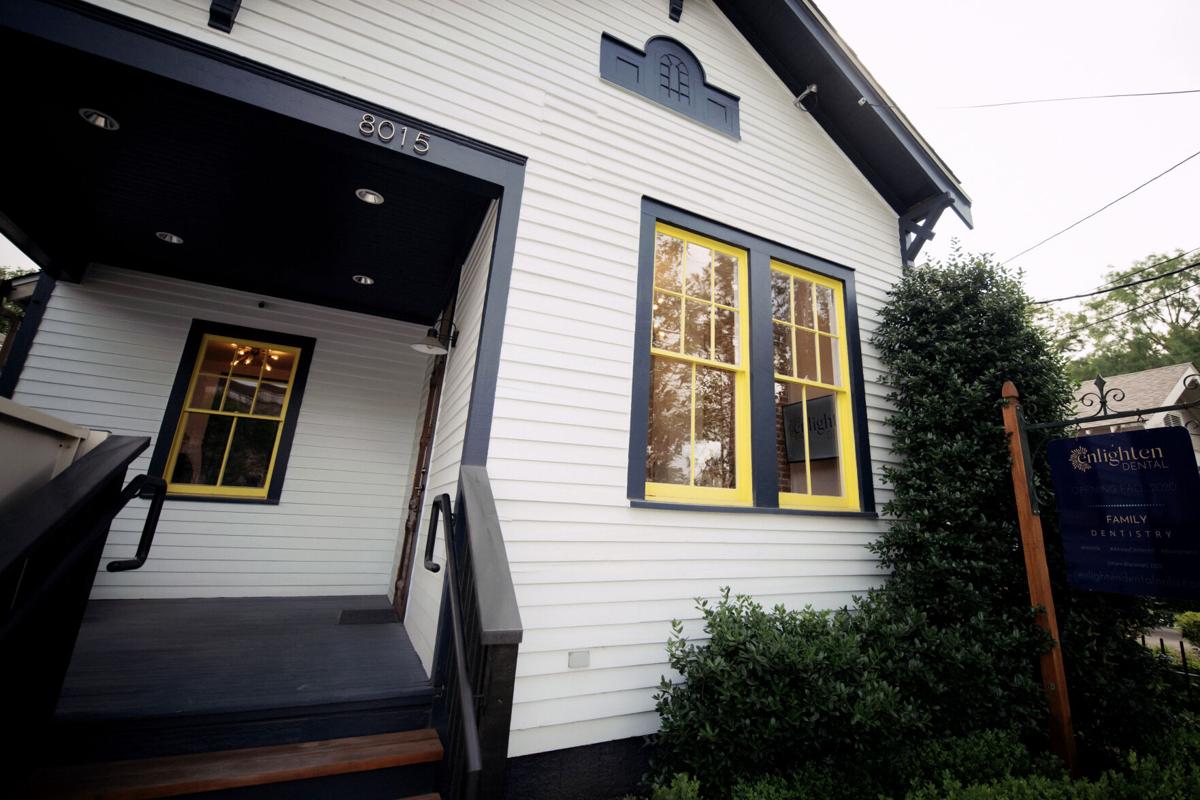 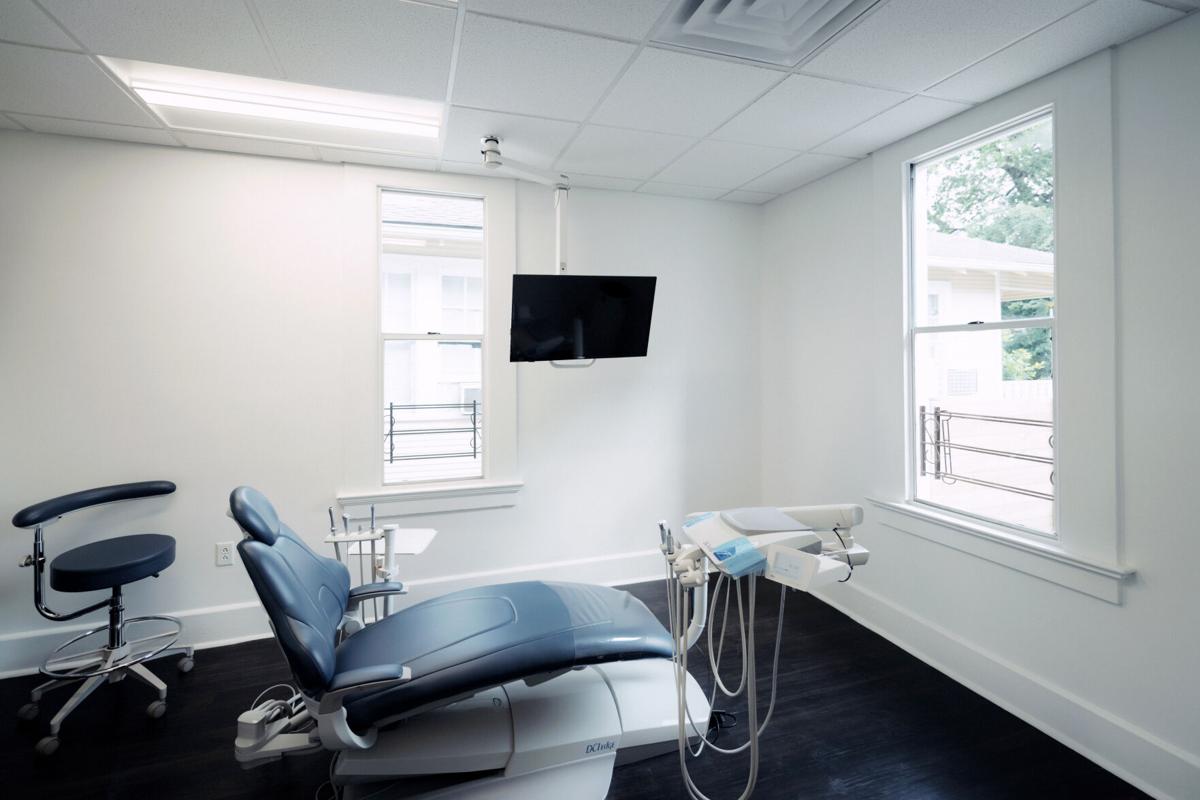 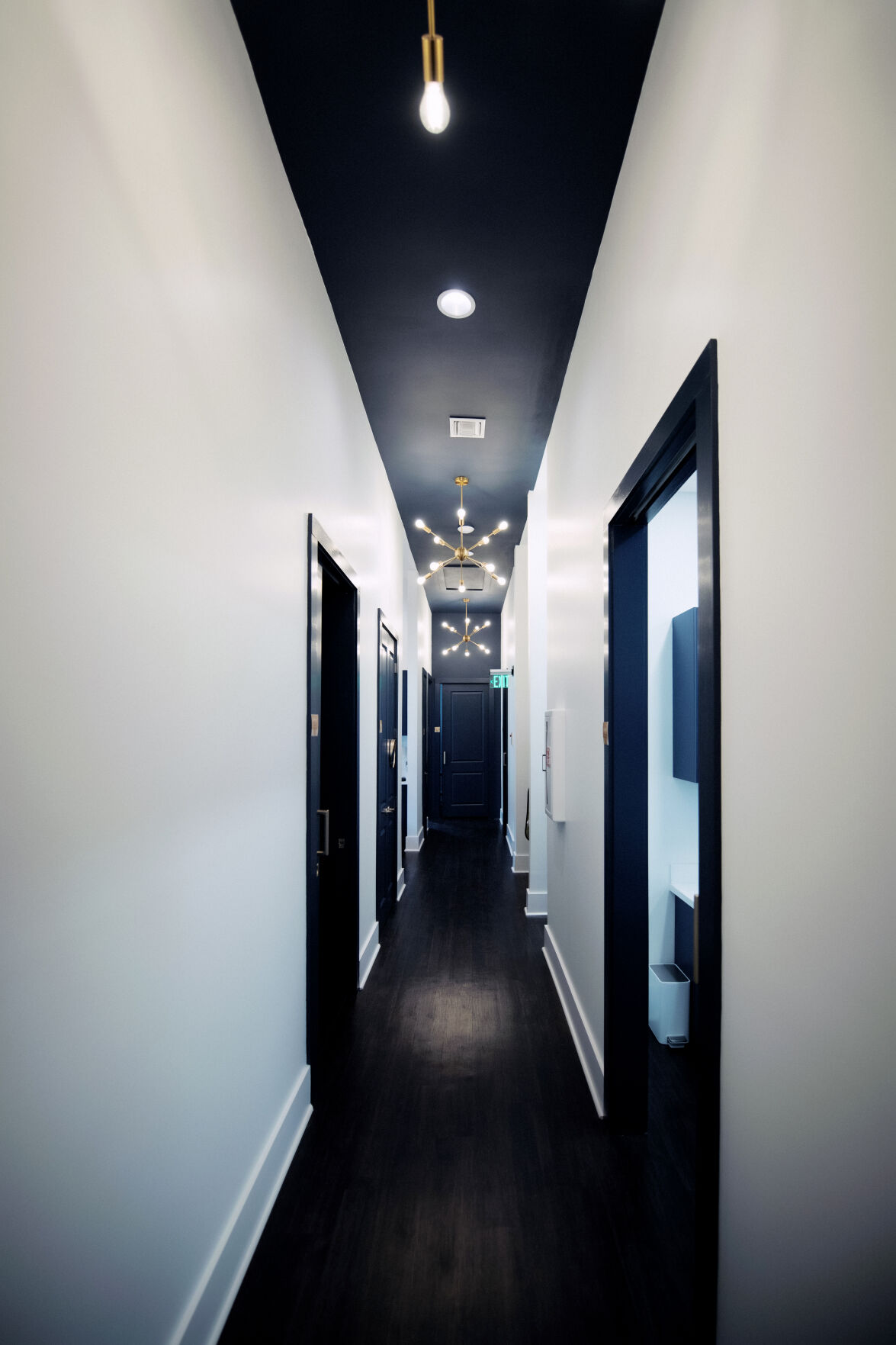 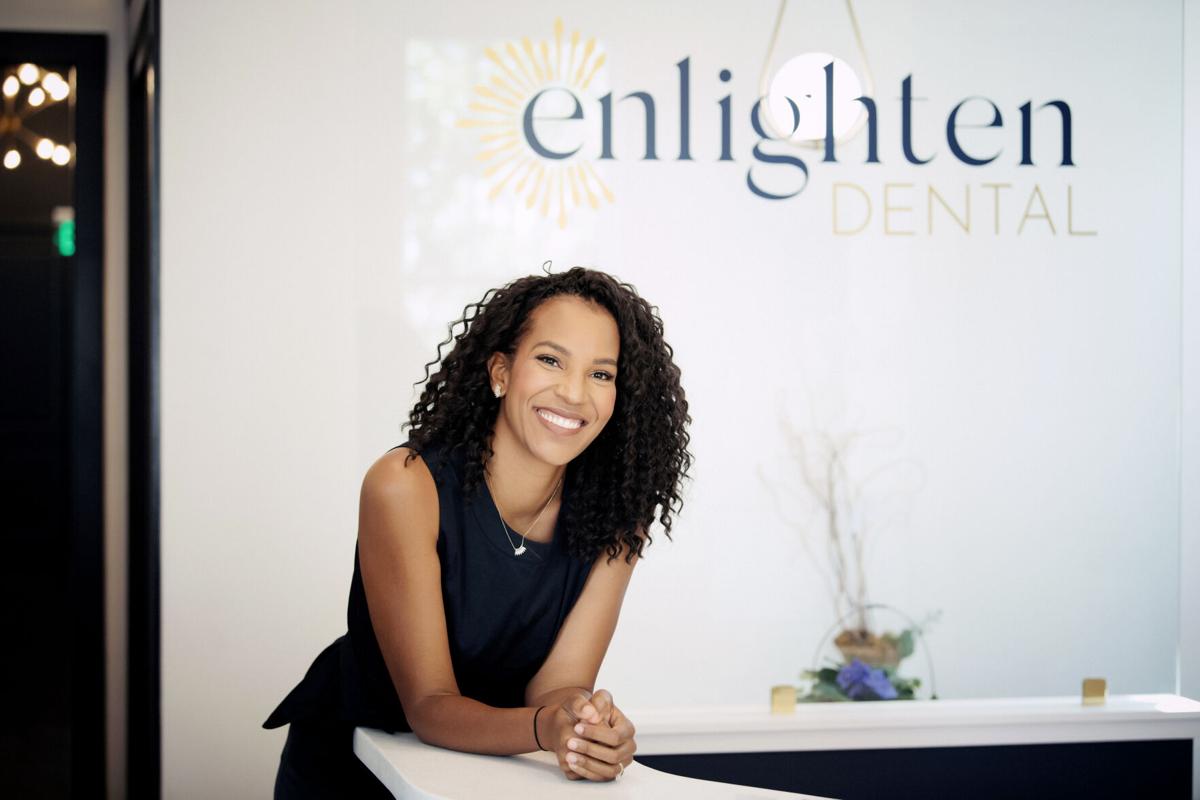 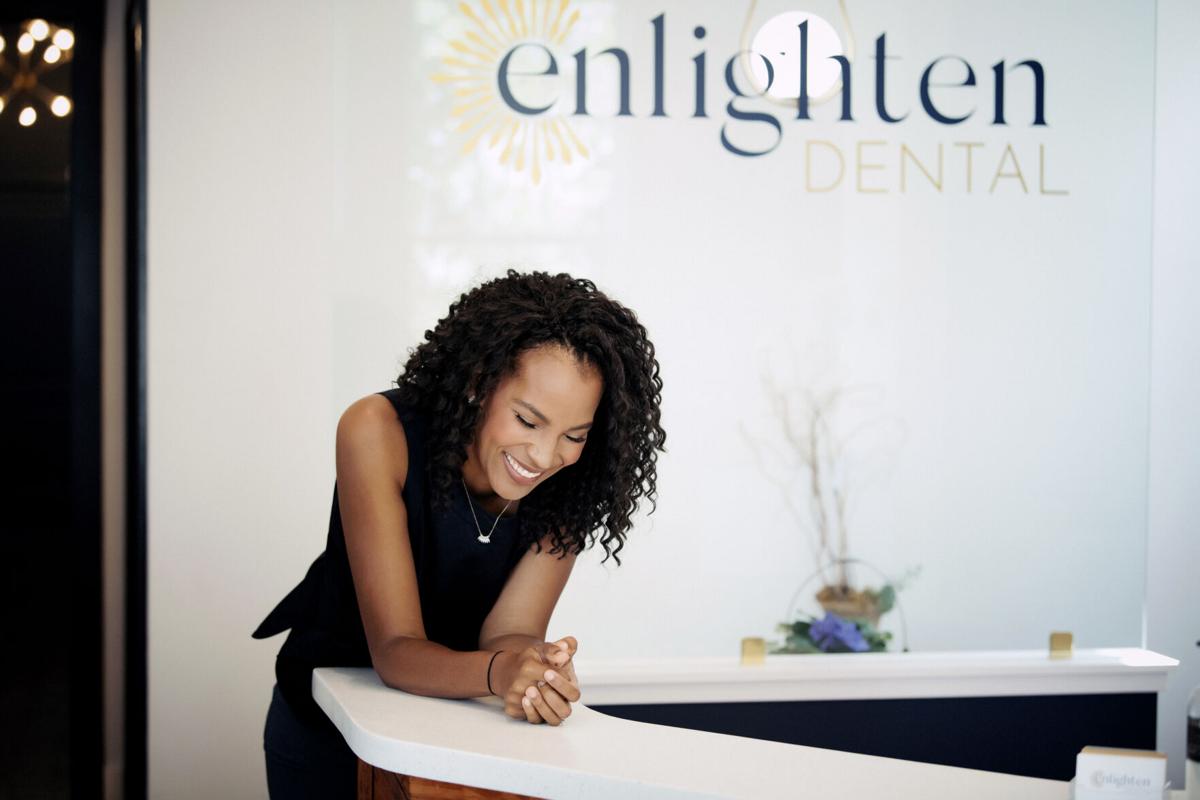 If you haven't heard of holistic or biological dentistry before, you aren't alone. New Orleans didn't have this option until Dr. Jimani Blackwell, DDS opened the very first holistic practice, enlightenDENTAL, last year.

Upon discovering a passion for healthier living after having children, she decided to leave traditional dentistry behind in search of a safer option for her patients and herself. Blackwell dove into research and started traveling across the country to meet biological dentists and attend conferences, and she officially opened the doors to her chic and comfortable Uptown office in December 2020.

"I was not expecting a pandemic when I started this journey, but glad that it happened while I was still in the planning stages," she told Adore. "We were able to design the office to protect our guests from oral aerosols along with the mercury vapor during dental treatment. Each room is a private suite with a Surgically Clean Air System, and these units clean and purify the air every 5 minutes."

What exactly is the difference between holistic and traditional dentistry? Blackwell says it is the materials and techniques used and that holistic dentistry takes a whole-body wellness approach. For instance, enlightenDENTAL does not use fluoride and focuses on materials that are more biocompatible to the human body. The office is free of mercury, the main toxin that Blackwell became concerned with, and mercury safe (i.e. fillings are removed in a safer way).

Blackwell is currently accepting new patients of all ages and enlightenDENTAL is covered by insurance as an out-of-network provider. She also offers a membership plan. "We are grateful for the support of our budding holistic community that found me early on. I was not expecting this level of support for bringing such a new model of dentistry to this area."

Below, more information on Dr. Blackwell, enlightenDENTAL, and her journey to holistic dentistry.

What was the final "push" for leaving traditional dentistry behind and founding enlightenDENTAL?

For about a decade, I practiced as a cosmetic, traditional, and general dentist the way I was trained in dental school. I also have a degree in Environmental Science from Spelman College. During my undergraduate years, we studied land, water, and air toxicology and its effects on the human body. When I got into dental school, I thought that I would never use my degree again. It is so interesting how my path towards holistic dentistry started so long ago. I had already been studying toxicology and even got a degree to show for it! Life is truly amazing.

While I was practicing as a traditional dentist, I started to have children and when you have children your life goes through so many changes. Three boys all within 2 years of each other. We turned our home upside down to ensure that our house was protected from toxins. I began to look at the ingredients of the soaps we used, I began to filter the water we ingested, the household materials had to be safe enough for my babies. I began researching everything that could potentially harm my children and then I thought about my career and what I could be bringing home from the day. I was so concerned about them that inadvertently I became concerned about myself. I want to be the best mother for them.

I had dived deep into dentistry and found an organization called the International Academy of Oral Medicine and Toxicology (IAOMT). This organization provides its readers with tons of research, fact sheets, and a protocol on how to safely remove mercury fillings from teeth. I aligned with this organization because of my background in Environmental Science. Mercury is the main toxin that I became most concerned with as it is a super harmful metal that is so commonly used in dentistry. I had been removing them unsafely for over a decade. These silver/mercury/amalgam fillings contain 50% mercury. Mercury has been shown to cause cognitive and neurological impairments, memory loss, sleep disruptions such as insomnia, kidney problems, gingivitis, abnormal oral manifestations, respiratory issues…honestly the list is extensive.

It made me think about how when I got into dental school people warned me that dentists had the highest suicide rate. I have known plenty of older dentists that have been asked to retire because their hands would shake so much, or they lost feeling in their hands or had some neurological disorder. It really makes you wonder if this is related.

In 2019, I took a big step and got my mercury levels tested with an Integrative Medicine doctor and she told me that my mercury levels were the highest that she had seen. It was like I was hit in the face with a brick. I was distraught. How many other dentists are in my position and they don't know it? All of those mercury fillings that I removed unsafely because the teeth were broken or the patient wanted a more natural, aesthetic looking smile. We were smeared in mercury amalgam dust in dental school.

I also found out that I have one genetic variant of MTHFR which puts my body at risk for holding in more toxins. I had to make a decision. Either I would not practice anymore, because there were no biological dentists here in Orleans Parish for me to work with or start a biological dental practice in New Orleans. The decision was not a hard one to make. I wanted to practice with a philosophy that was safer and least toxic. It was important to me to be proactive so that I do not harm myself or my family. I wanted my treatments to be safer for my patients and the environment. This transition into biological dentistry was not easy. My days were filled with research and travel around the country to visit other biological dentists and new conferences I had never even heard of prior. Once I felt comfortable and confident in this type of dental care, I began to plan enlightenDENTAL for New Orleans.

What are the biggest differences in traditional and holistic dentistry?

The biggest differences between a traditional dental practice and a holistic dental practice are the materials and techniques used. We are not only mercury free, but we are mercury safe. Mercury safe means that we do not place mercury into people’s bodies, and when it is time for the mercury to be removed, we remove them according to the Safe Mercury Amalgam Removal Technique (SMART) protocol according to the IAOMT.

Holistic or biological dentists also practice without the intentional use of fluoride. We are fluoride-free at my dental practice. While fluoride has been shown to be effective in preventing decay, it has also shown to lower IQs in children. I do not feel comfortable giving my patients what I would not give to my own children. There are plenty of other ways to prevent decay through diet and lifestyle. We also provide an anti-cavity treatment in our practice which does exactly what the teeth need to do to prevent decay and that is remineralize.

We focus on materials that are more biocompatible to the human body. Dental ozone has been emerging as a highly effective therapy in medicine. Although controversial because of its effect on the respiratory system, it is a highly biocompatible antimicrobial therapy used in dentistry. Some biological dentists use dental ozone in cleanings, restorative procedures, and even to prevent or to reduce minor decay. We use it in our zero-colony forming clean water system at enlightenDENTAL.

How is holistic safer?

When I think of holistic, I think of a whole team approach to treat the root cause. This is the basis of functional medicine and dentistry… it is a whole body, root cause approach to treating people instead of chasing signs and symptoms. It takes the effort and expertise of several fields in order to adequately treat someone. I would not be able to do my job successfully without my patients doing the work to educate themselves. I would not be able to do my job properly without the expertise of functional medicine health coaches, myofunctional therapists, functional medicine doctors, and PAs, speech pathologists, lactation consultants, chiropractors, etc.

Carrying the philosophy to perform dentistry safer and least toxic requires an understanding of the art and science of the human form and how toxic materials affect the human body. An important part of practicing dentistry is doing it in a way that is long lasting and comfortable for our patients, but that is not the only part. It can be comfortable, long lasting, and pain-free, and we want to make sure that it is not adding to the toxic burden on this person's body. It's important for me to slow down and look at the person in front of me as a whole person and not just a tooth that needs to be repaired.

With holistic dentistry, how often would a patient come in for a basic cleaning/checkup?

It all depends on what each patient needs. We develop a customized plan for each person. While most people get their cleaning and exam every 6 months, some people need to see us more to get their teeth and gums stabilized before we can place them on a 6-month schedule.

Are there other dentists in your office or just you?

Currently, it is me. When people come, they consistently receive care from the same dentist… me. Maybe one day we will have another dentist that carries a holistic philosophy, but as of now it is just me!

enlightenDENTAL is located at 8015 Maple Street.